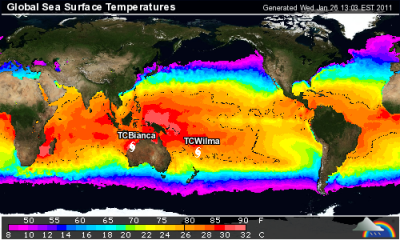 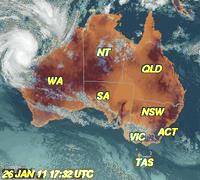 Media: The Standard Emergency Warning Signal should NOT be used with this
warning.

A Cyclone WATCH has been declared for coastal areas from Jurien Bay to Albany,
including Perth, Bunbury and Busselton.

Severe Tropical Cyclone Bianca continues to move in a southwest direction away
from the northwest of the state. Strong and gusty winds are still possible in
areas between Cape Preston and Carnarvon though winds will ease from the east
during the day.

Severe Tropical Cyclone Bianca is expected to gradually weaken as it takes a
more southerly track overnight. On Saturday Bianca will move in a southeasterly
direction towards the southwest corner of the state while weakening steadily.
However there is a significant risk that Bianca will maintain tropical cyclone
intensity as it approaches the coast early on Sunday. If this scenario
eventuates, coastal areas between Jurien Bay and Albany could experience
DAMAGING WINDS with gusts to 120 kilometres per hour.

On Sunday tides between Jurien Bay and Cape Naturaliste are likely to rise
signficantly above the normal high tide mark with VERY ROUGH SEAS, DANGEROUS
SURF and FLOODING of LOW LYING COASTAL AREAS. SIGNIFICANT COASTAL EROSION is
possible. Heavy rainfall is also possible on the southern side of the system.
FLASH FLOODING is possible but extensive flooding is not expected.

SEVERE to EXTREME FIRE DANGERS are likely across a broad area south of a line
from Geraldton to Esperance on Sunday.

FESA State Emergency Service (SES) advises of the following community alerts:
ALL CLEAR WITH CAUTION: People in or near Exmouth and Coral Bay are advised
that wind dangers have passed and people should proceed with caution.

People in the southwest of the state should listen for further advice during
today.

A map showing the track of the cyclone is available at:
http://www.bom.gov.au/weather/cyclone 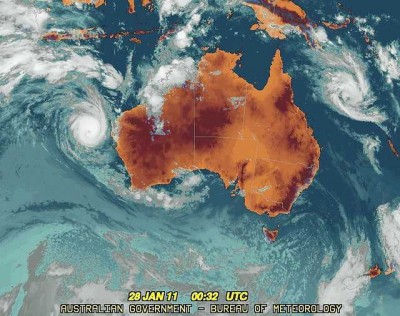 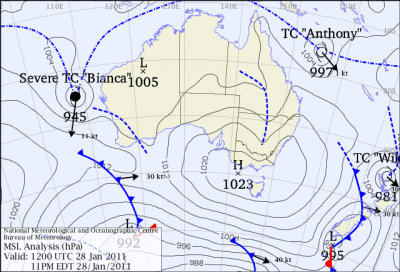 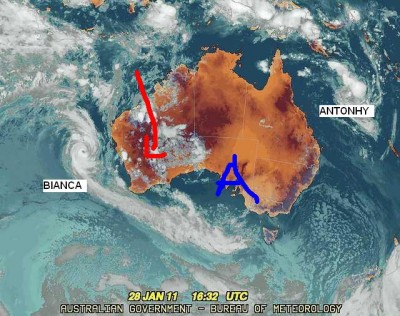