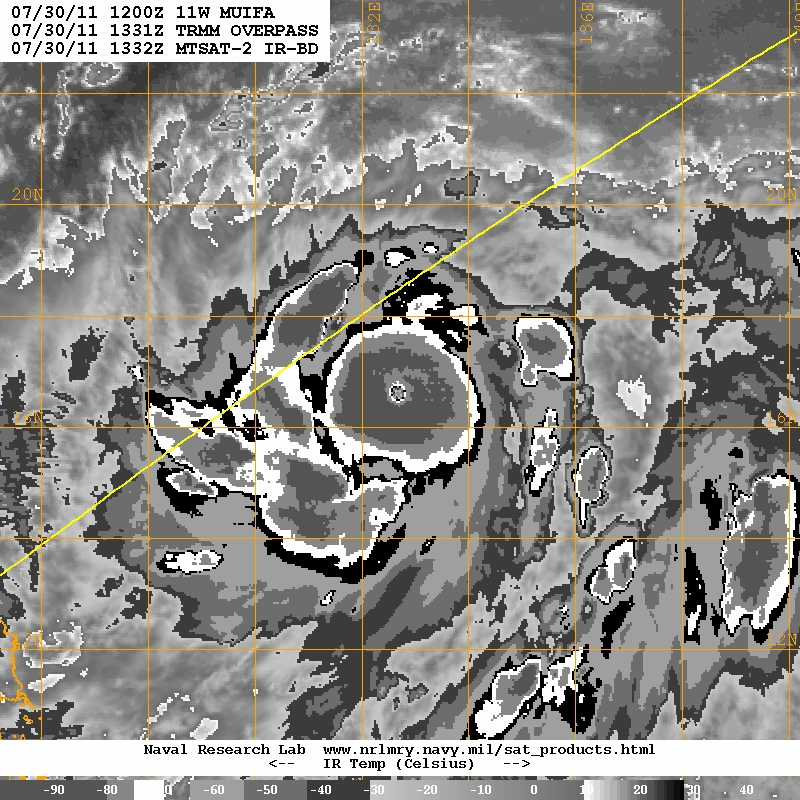 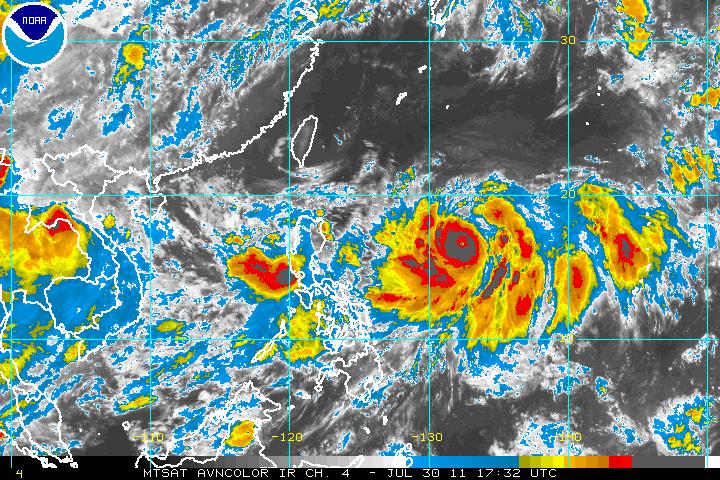 de apoco empieza a perder intensidad pero es muy probable que afecte a las costas de taiwan, china y japon..
Esta es la discusion:
Typhoon (TY) 11w (Muifa), located approximately 610 nm
southeast of Kadena air base, Japan, has tracked northeastward at 08
knots over the past six hours. Animated infrared satellite imagery
shows a 5nm pin hole eye with large convective banding along the
southern periphery. However, weakening is evident over the past 12
hours in infrared satellite imagery, which shows erosion of the
eyewall along the northern periphery. An upper level trough is
causing subsidence along the northern side of TY 11w. Additionally,
a tropical upper tropospheric trough (tutt) cell currently providing
an outflow channel to the northwest is moving farther away from the
system. Poleward outflow to the northeast and equatorward outflow
remain favorable. The initial intensity was based on the pgtw and
rjtd Dvorak current intensity estimates ranging from 115 to 130
knots. TY 11w is currently tracking under a weak steering
environment between a ridge centered to the southeast and a ridge
centered over eastern China.
3. A. The forecast track has not changed from the previous forecast
philosophy. However, the intensity forecast is lower than previously
expected because of the current weakening trend.
B. The system is expected to track poleward within the weakness
between the two steering ridges over the next 36 hours. After tau
36, a steering ridge to the north is forecast to build in, allowing
TY 11w to turn northwestward toward Okinawa, Japan. TY 11w is
expected to maintain intensity due to the favorable outflow balanced
by the pressure to the north. The system should then steadily weaken
as it tracks farther northward because
ocean heat content will drop off and poleward outflow will likely be
cut off as the ridge to the north builds in.
C. After tau 72, TY 11w should continue tracking northwestward
toward Okinawa, Japan and slowly weaken. This forecast is in good
agreement with the models that are tightly packed including NOGAPS,
JGSM, and ECMWF. GFS and GFDN are the eastern outliers while EGRR is
the western outlier.//
No tiene los permisos requeridos para ver los archivos adjuntos a este mensaje.
Arriba 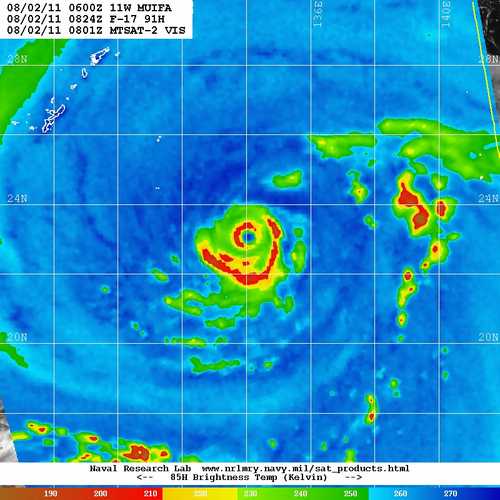