wdpn31 pgtw 210300
msgid/genadmin/navmarfcstcen Pearl Harbor hi/jtwc//
subj/prognostic reasoning for tropical depression 04w
/warning nr 04//
rmks/
1. For meteorologists.
2. 12 hour summary and analysis.
A. Tropical depression (td) 03w, located approximately 45 nm
southeast of Yap, has tracked westward at 05 knots over the past
six hours. Animated multispectral satellite imagery (msi)
depicts a fully-exposed low-level circulation center (LLCC) with
an isolated burst of deep convection over the southeast quadrant.
The large area of intense deep convection displaced south of the
system has continued to shear southward under moderate northerly
vertical wind shear and has weakened diurnally over the past 08
hours. The system was downgraded to a TD based on a number of
factors: recent ascat data indicating 25-30 knot winds, surface
observations from Yap (45nm northwest) showing only 10-15 knot
sustained winds, Dvorak estimates decreasing to 25-30 knots, and
the lack of deep convective banding evident in the 2110z ssmis
37h image. There is good confidence in the current position
based on the exposed LLCC in msi. The upper-level environment
remains marginal with 10-20 knots of northerly vertical wind
shear hindering poleward outflow but offset slightly by good
equatorward outflow.
3. Forecast reasoning.
A. No change in forecast philosophy. The forecast track has
been shifted south slightly and the forecast intensification
rate through tau 24 was decreased.
B. TD 04w is tracking slowly westward under the steering
influence of the low- to mid- level subtropical ridge positioned
north of the system. TD 04w has tracked more westward than
expected under an east-west oriented low-level ridge over the
past 12 hours due to the weak organization. The system should
track west-northwestward within the next 24 hours as it
strengthens under an improving upper-level environment. In
particular, poleward outflow is forecast to improve ahead
of an approaching shortwave trough. Model guidance is in fair
agreement with JGSM and GFS on the northern edge of the aids
envelope and indicating a more poleward track through tau 36.
The ukmo model shows a more westward track into the central
Philippines. This forecast favors NOGAPS, GFDN, ECMWF and WBAR
and is positioned close to the consensus but slightly faster
at the extended Taus. TD 04w is forecast to intensify slowly
through tau 24 but should intensify at a faster rate through
tau 72 due to the aforementioned improving environment.
C. In the extended Taus, TD 04w is forecast to turn more
poleward along the southwest periphery of the mid-level
subtropical ridge. The system is expected to reach a peak
intensity of 105 knots by tau 120.//
No tiene los permisos requeridos para ver los archivos adjuntos a este mensaje.
Última edición por Tincho el Jue May 26, 2011 4:12 pm, editado 1 vez en total.
Arriba

wdpn31 pgtw 211500
msgid/genadmin/navmarfcstcen Pearl Harbor hi/jtwc//
subj/prognostic reasoning for tropical storm 04w warning nr 06//
rmks/
1. For meteorologists.
2. 12 hour summary and analysis.
A. Tropical Storm (TS) 04w, located approximately 30 nm southwest
of Yap, has tracked west-northwestward at 06 knots over the past six
hours. Animated infrared (ir) satellite imagery and a 211113z ssmis
microwave pass depict tightly curved convective banding wrapping
into a consolidating low level circulation center with building
central convection. The current position is extrapolated from
animated IR imagery and the ssmis microwave image with fair
confidence. The current intensity is based on Dvorak estimates of 35
knots from pgtw and knes. Surface observations from Yap near cpa
time (11z) indicated a mslp of 999 mb and sustained winds of 22
knots with an observed Max gust of 42 knots. Upper level analysis
indicates that the system is located under the ridge axis in a
region of good diffluence aloft. Northerly vertical wind shear,
previously hindering development, has relaxed. Animated water vapor
imagery continues to show good equatorward outflow, while poleward
outflow is minimal.
3. Forecast reasoning.
A. There are no significant changes in forecast philosophy from
the previous prognostic reasoning bulletin.
B. Ts 04w is currently tracking along the southwestern periphery
of a mid-level subtropical ridge (str). The system will track
generally west-northwestward through tau 48 under the influence of
the str and steadily intensify as it tracks over warm sea surface
temperatures and under increasingly favorable upper level
conditions. In particular, poleward outflow is forecast to improve
ahead of an approaching shortwave trough, which is also expected to
weaken the steering ridge near tau 48, allowing the system to turn
poleward. Numerical model guidance is in fair agreement through tau
36, but begins to diverge by tau 48, with GFS and JGSM tracking the
system more poleward and GFDN and WBAR tracking the system westward
toward the Philippines. This forecast favors EGRR, ECMWF, and
NOGAPS, which are tightly clustered with consensus and have remained
consistent over the past several model runs.
C. In the extended Taus, ts 04w is forecast to turn more poleward
along the southwest periphery of the mid-level str and steadily
intensify under the increasingly favorable environmental conditions
previously described.//

Actualizo la situacion, ya se le ha dado nombre a esta tormenta tropical, Songda, proximo a ser categoria 1 de tifon!
A. Tropical Storm (TS) 04w (Songda), located approximately 190 nm
north-northeast of Palau, has tracked west-northwestward at 06 knots
over the past six hours. Animated infrared satellite imagery and
recent microwave imagery (221014z trmm and 221102z ssmis) depict
tightly curved banding wrapping into a formative eye feature with
deep central convection building over the low level circulation
center. There is fair confidence in the current position based on
the formative eye feature in the aforementioned microwave imagery.
The current intensity is based on Dvorak intensity estimates from
knes and pgtw of 55 knots. Upper level analysis indicates that the
system remains in an area of low (10-15 knot) vertical wind shear
(vws). Development of an anticyclone directly above the system is
providing strong diffluent flow aloft. Over the past 06 hours,
animated water vapor imagery has shown steady equatorward outflow
and improved poleward outflow ahead of an approaching shortwave
trough.
3. Forecast reasoning.
A. No change in forecast philosophy.
B. Ts 04w has tracked slowly west-northwestward along the
southwestern periphery of the mid-level subtropical ridge (str) and
is forecast to continue tracking generally west-northwestward
through tau 48. Numerical model guidance is in excellent agreement
in the early Taus, with the exception of GFDN, which depicts a
slightly more westward track. Ts Songda is expected to intensify
throughout the forecast period as it continues to track over
favorable sea surface temperatures and within an improving upper
level environment.
C. In the extended Taus, the system is forecast to track
northwestward and then poleward as it rounds the southwest periphery
of the str. An approaching mid-latitude trough will weaken the
western extent of the str and allow the system to re-curve after the
forecast period. With the exception of GFDN, which tracks the system
into northern Luzon, numerical model guidance is in fair agreement.
GFS has continued to trend southward but remains the eastern outlier
within the aids envelope. The official jtwc forecast is consistent
with the previous forecast and remains close to model consensus,
EGRR, ECMWF, and NOGAPS.
Arriba 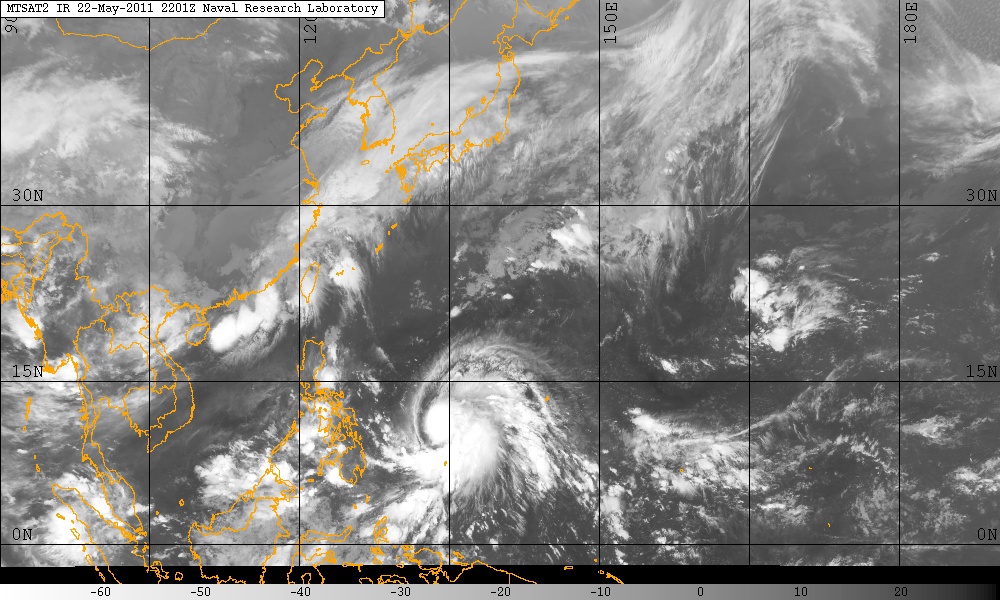 Ha nacido el primer Tifon de la temporada! categoria 1, y sigue creciendo!!
http://icons-pe.wunderground.com/data/i ... 201104.gif
este es el analisis
12 hour summary and analysis.
A. Typhoon (TY) 04w (Songda), located approximately 500 nm
east-southeast of Manila, Philippines, has tracked west-northwest-
Ward at 09 knots over the past six hours. Animated infrared satellite
imagery reveals cloud tops are cooling and consolidating around the
low level circulation center (LLCC). Animated water vapor imagery
shows improving outflow as an upper level trough northwest of the
system fills. Total precipitable water loops indicate substantial
inflow of highly saturated air into the southern half of the system.
Enhanced infrared imagery shows a pronounced asymmetry in the
convection, with the highest tops concentrated over the southern
semicircle. A 240732z SSMI pass shows nearly continuous low level
banding around the LLCC and an increase in deep convection relative
to previous passes. TY 04w is tracking steadily through a break in
the sub-tropical ridge over the Philippine Sea. Conditions along
track are favorable for intensification, with highly diffluent flow
in the upper atmosphere and less than 10 kts of vertical wind shear,
and sea surface temperatures of 29-30 degrees celsius. The current
intensity analysis is based on Dvorak estimates of 65 knots from
pgtw and knes. There is good agreement among the fixing agencies and
high confidence regarding the current position.
3. Forecast reasoning.
A. The forecast reasoning has not changed since the previous
prognostic reasoning bulletin.
B. The sub-tropical ridge will build and intensify over the next
72 hours as an upper level anticyclone builds north of the marianas
and shifts westward. TY 04w will steer along the western periphery
of that ridge and then recurve through the ryukus, gradually
accelerating and tracking seaward of Kyushu and shikoku. During the
first 72 hours, vertical wind shear will remain weak while sea
surface temperatures and ocean heat content will remain high,
allowing Songda to steadily intensify through 20 degrees north
latitude. Model guidance is in good general agreement regarding
track and speed through the first 72 hours, with the exception of
EGRR and JGSM, which track the system over extreme northeastern
Luzon and into the Luzon Strait. NOGAPS, GFS, and GFDN, as well as
consensus, all indicate that TY 04w will round the westernmost arc
of the ridge and enter its recurvature phase near tau 66, at
approximately 20 degrees north latitude. Simultaneously the system
will reach its maximum intensity. The track forecast through tau 72
follows consensus.
C. Sea surface temperature and ocean heat profiles indicate that
TY 04w will encounter sharply less favorable oceanographic
conditions north of 25 degrees north latitude. Some of the
oceanographic effects will be mitigated by a temporary boost in
outflow due to an approaching mid-latitude trough. The trough is
expected to dig as far south as Taiwan near 281200z and boost
poleward outflow, which will keep the system above typhoon intensity
through the northern ryukus. By the time TY 04w moves into the
northern ryukus, however, vertical wind shear will begin to increase
significantly and couple with the unfavorable oceanographic
conditions to weaken the storm. The jtwc forecast remains consistent
with the previous forecast and close to, but slightly faster and
equatorward of model consensus after tau 72 in order to account for
observed tendencies during recurvature scenarios.
Arriba
37 mensajes