A level 2 was issued for Southern to Central France, extreme Northwestern Switzerland and Southern Germany mainly for large hail, severe wind gusts and to the lesser extent for excessive precipitation.

A level 2 was issued for Western Germany, Denmark mainly for severe wind gusts, tornadoes, excessive precipitation and to the lesser extent for large hail.

A level 1 was issued for the regions surrounding the Level 2 mainly for severe wind gusts, large hail and excessive precipitation.

A level 1 was issued for England and Wales for tornadoes.

A level 2 was issued for Finland, northern Karelian Republic and the western Kola peninsula for tornadoes, severe wind gusts and to the lesser extent for marginally large hail.

A level 1 was issued for Eastern and Northeastern Scandinavia, Northwestern Russia mainly for tornadoes and severe wind gusts.

A level 1 was issued for Slovenia, Croatia, Bosnia and Herzegovina, Ukraine, Belarus, Lithuania mainly for excessive precipitation and to the lesser extent for marginally large hail or marginally severe wind gusts.

The main macro-synoptic feature at mid levels will be a trough with axis over the Eastern Atlantic, with an embedded cold-core low centered over Ireland by Wednesday 12 UTC, moving slowly to northeast.
Strong flow surrounds the fringes of the trough with windspeeds up to 40 m/s at 500 hPa level.
A short wave trough will translate with this flow in the evening and early night hours over Northern France, Benelux countries towards Scandinavia.
To east, a large ridge will stretch from the Central Mediterranean, across much of Central Europe into Northwestern Russia.

At the surface a centre of the deep low will reside close to or over the British Isles. Its trough will extend with the frontal system to the southeast and will accelerate quickly eastwards during the day.
Mesoscale low will probably form within the frontal wave over Benelux and might become a significant factor in scenario.
Ahead of the frontal system, high Theta-E airmass is advected at lower levels to northeast.

Ahead of the frontal zone, high Theta-E airmass is advected at lower levels and as cooler mid-level temperatures overspread this airmass a belt of moderate latent instability is forecast to form.
Models are in fairly good agreement regarding the CAPE values, which should be mostly in the range of 1000-1500 J/kg.

With strong southerly to southwesterly flow aloft, high values of wind shear are forecast, with over 25 m/s of DLS and 20 m/s of MLS, values sufficient for very well organised convection, including supercells. With weak relative upper level flow, convection will probably tend to organise into quasi-linear system rathern than into long-lived supercells. Another factor speaking for such system is the orientation of the mid and upper level flow to the boundary, which is almost parallel and therefore, quick clustering is expected. Nevertheless, the possibility of isolated, steadier supercellular convection, especially in the earlier stages of scenario can not be discounted.

Forcing should be very favorable, in the form of the cold front and as the above mentioned short wave trough , which might induce or support cyclogenesis in the axis of the frontal trough.
Such low would probably contribute to the backing of the surface winds (increasing SREH values) ahead of it and to the strenghtening wind field at lower levels.
Models simulate 30 m/s 700 hPa flow during evening and night hours in the proximity and behind of the surface front.

With such strong wind field at lower levels, quickly travelling mid-level short wave trough and strong tendency for storm clustering, severe quasi-linear MCS might travel at high speeds to northeast along the front and produce a swath of severe wind gusts, including some gusts over 32 m/s.
This will be the prime threat and Level 3 is issued especially for the area, where the passage of severe MCS is most probable.
In the earlier stages, when isolated form of convection will prevail and over the southern parts of Level 2, large hail will be a threat, especially if supercells form.
In that case, hailstones over 4 cm might be observed. Especially to the northwest of the mesoscale low, excessive precipitation might occur, at the northern end of large MCS with possibility of "train effect".
With high effective PW values, at least short term excessive precipitation can not be ruled out elsewhere in Level 2.
Last, but not least, tornadoes might occur and more so in the environemnt with higher SREH and LLS ahead of the mesoscale low and lower LCLs during the late evening and night hours - therefore BENELUX and Northwestern Germany will probably be the region with the highest probability of tornado occurence.
The fact that the convection will tend to occur mostly in linear clusters limits the potential for tornadoes

As front progresses eastwards during the night hours, instability will diminish and become likely elevated but a slight chance for severe weather will still exist, especially as strong low level wind field will remain immediately behind the cold front.

To the south, isolated to scattered convection might form over Alpine region during the day and in moderate wind shear and instability, isolated large hail or isolated event of excessive precipitation is not ruled out.

Behind the cold front, polar maritime airmass will advect over the region with low LCLs. Diurnall heating will lead to the destabilisation and scattered showers or low topped thunderstorms are possible.
In fresh westerly flow, moderate wind shear values, 15-20 m/s of DLS might sustain some well organised storms.
Combined with strong shear at lower levels ( over 10 m/s of LLS) an isolated tornado can not be ruled out and a low-end Level 1 is introduced for this region.

As the surface low progresses quickly northeastwards, high Theta-E airmass will be advected on its forward flank to the unusally high latitudes and 850 hPa temperatures will likely exceed 14°C just north of the Arctic Circle.
Ahead of the cold front, low to moderate instability built-up is simulated by both GFS and ECMWF. Forcing will likely come mostly from the front and surface convergence close to the center of the low with lacking support at mid or upper levels.
Strong wind shear reaching 20 m/s in 0-6 km layer might lead to well organised convection, including some supercells, which are most probable at the northern part of the Level 2, where the highest SREH values are simulated (close to the warm front). Also strong low level wind shear is predicted, which is predicted to exceed 15 m/s in 0-1 km layer locally. With low LCLs and in case that supercells manage to form, tornadoes might become a distinct threat, especially in Level 2 region. Besides tornadoes, severe wind gusts might occur as well, thanks to the strong low level flow (especially in case that MCS form along the front) and marginally severe hail can not be ruled out either.

In the environment of very weak flow, diurnal heating is expected to lead to the moderate instability built-up, with CAPE values likely exceeding 1000 or locally even 1500 J/kg.
Due to the very weak wind shear, under 10 m/s in 0-6 km layer, single cells or disorganised multicell clusters can be expected.
With high boundary layer moisture content (mixing ratios over 14 g/kg) , very slowly moving cells might produce locally excessive precipitation.
Also pulse storms with marginally severe hail or wind gusts can not be ruled out completely and a low end Level 1 is introduced for these areas. 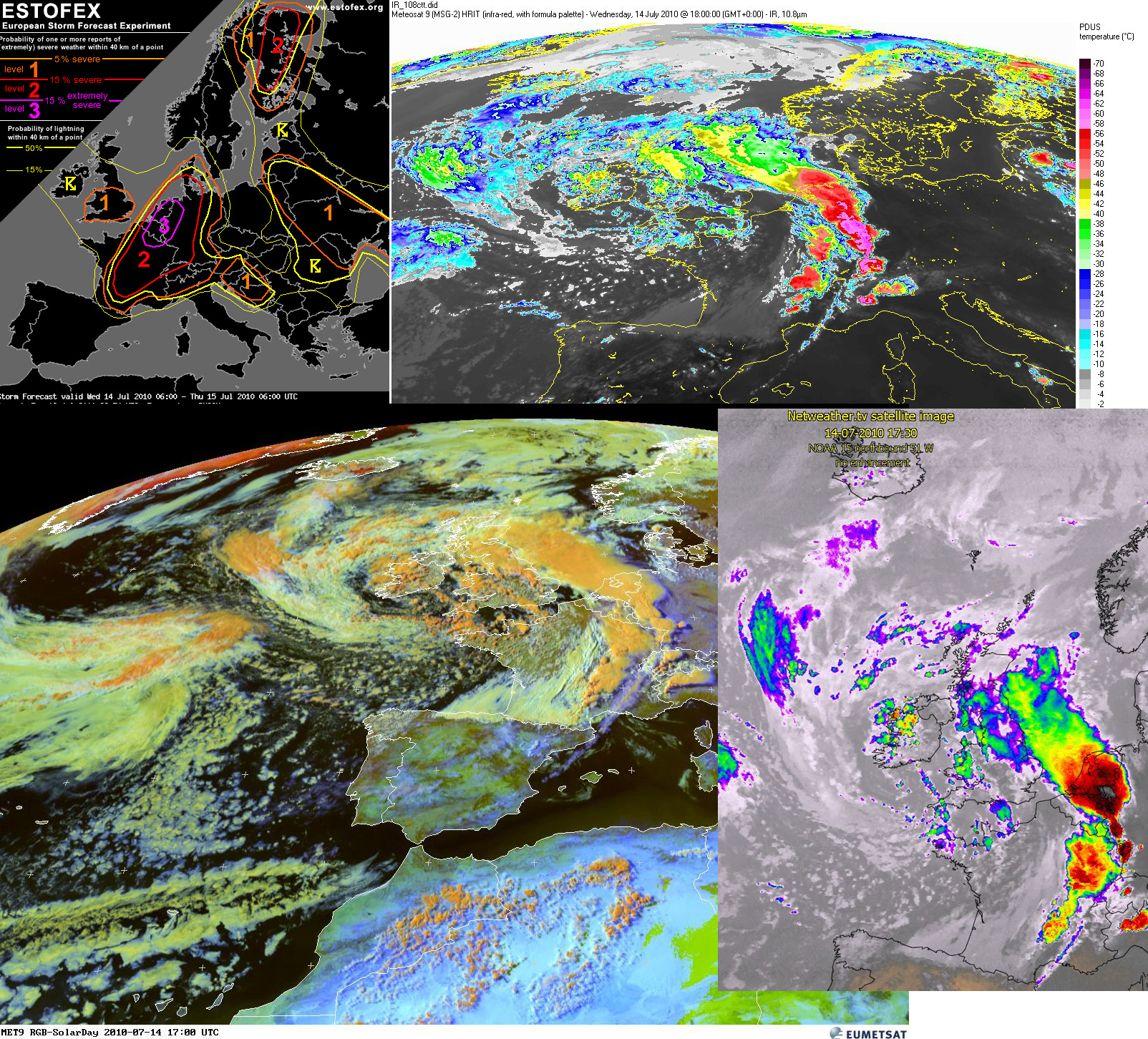 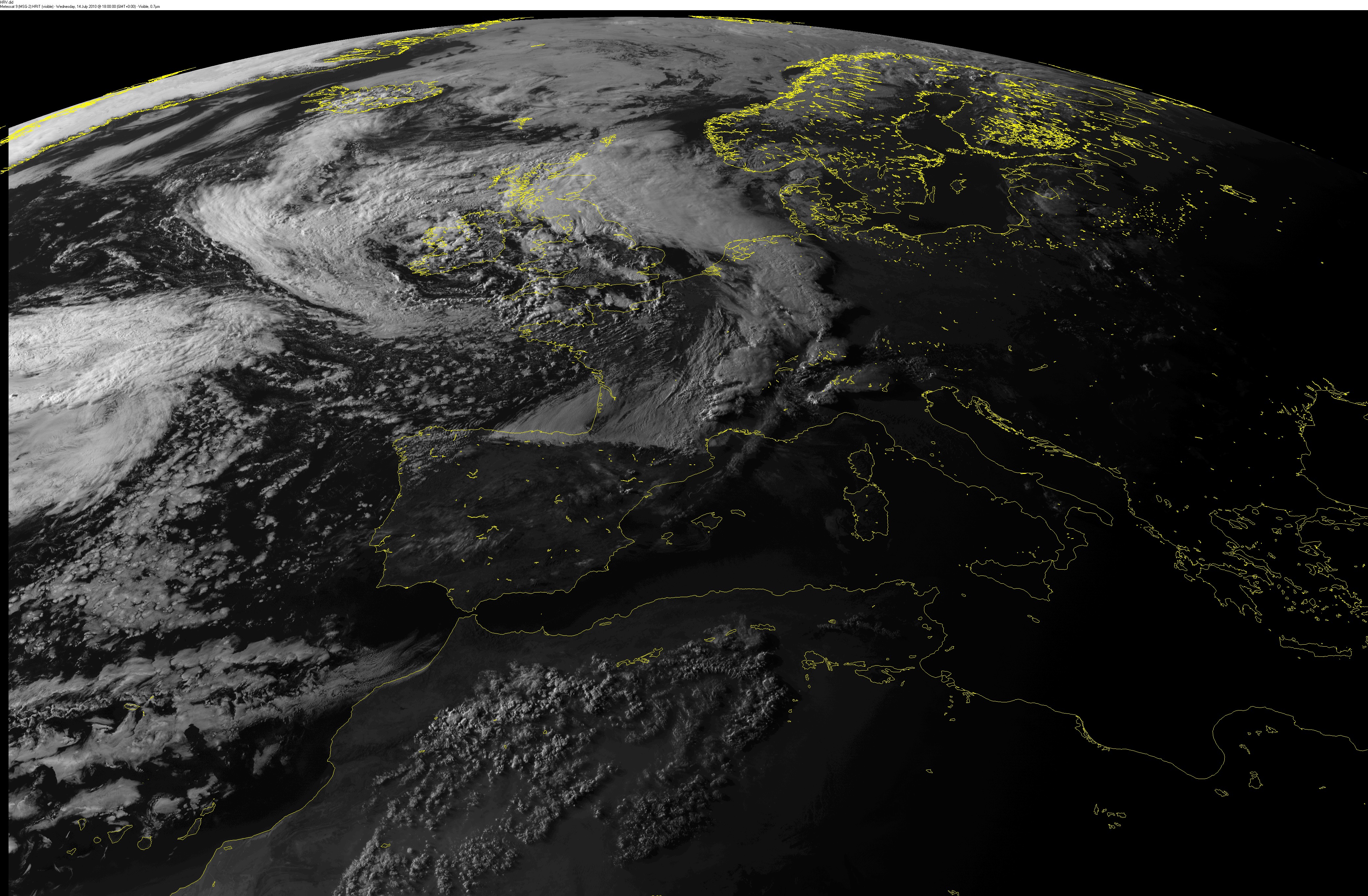 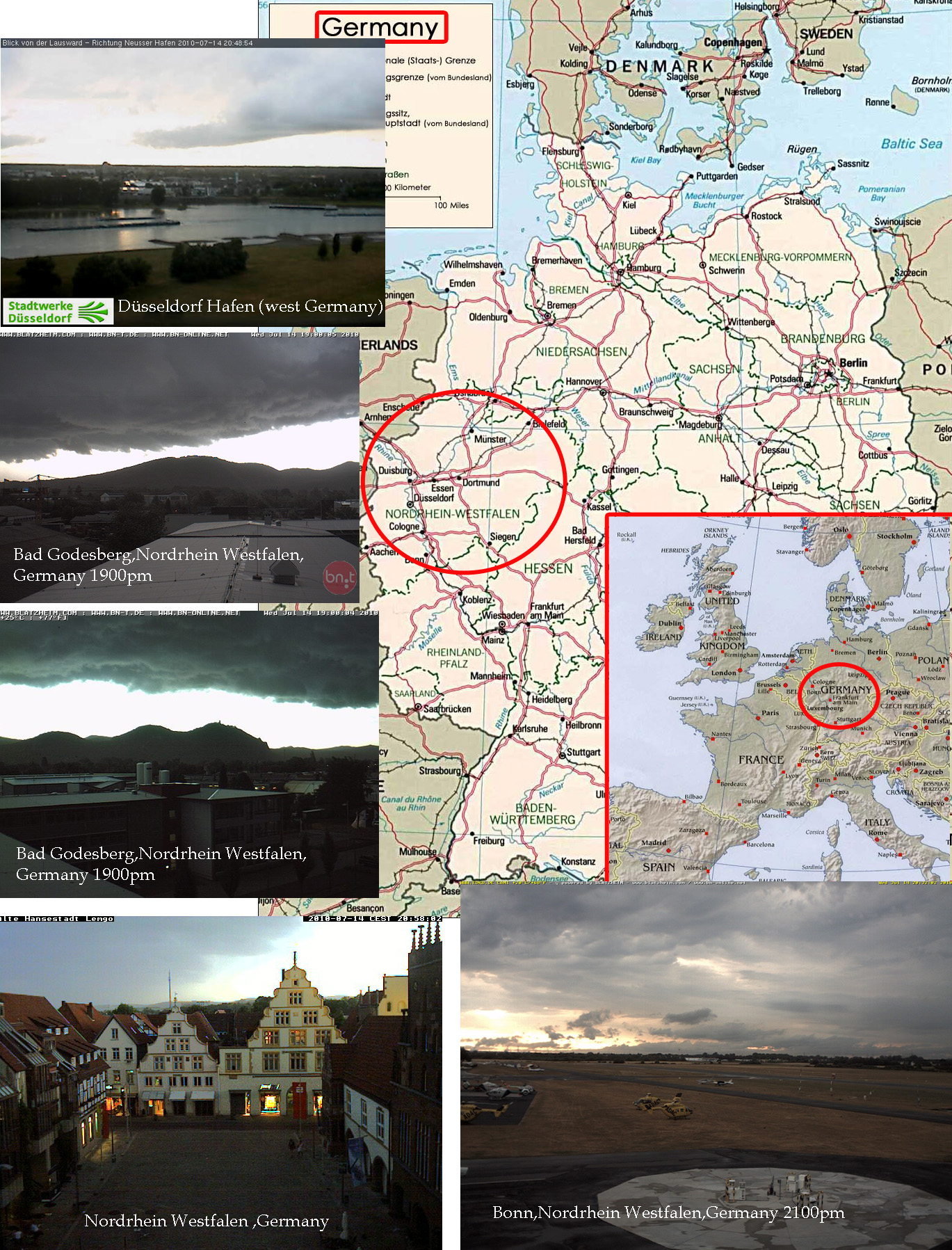 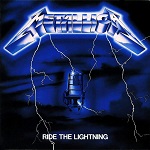